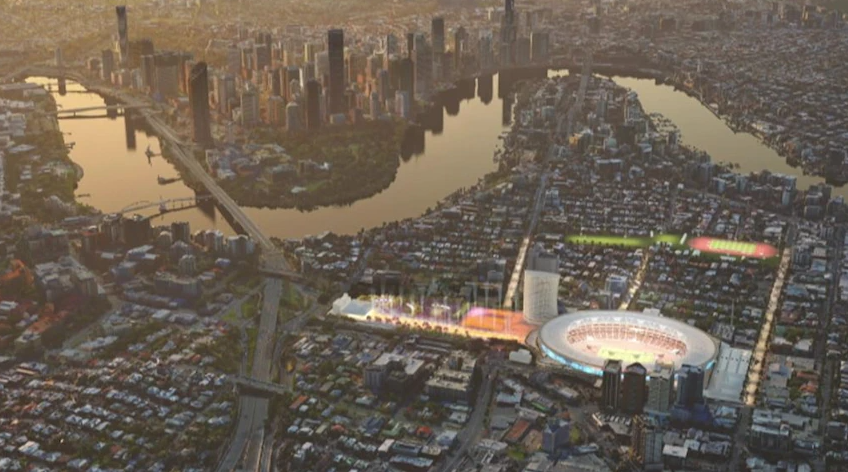 The 2032 Brisbane Olympic and Paralympic Games

Due to the lack of community consultation conducted by the government, I’ve been working with Councillor Jonathan Sri to fill this gap, hosting community meetings and running a community survey.

So far we’ve heard from locals that they are concerned about the loss of green space, in particular Raymond Park, the impacts on EBSS, and the possibility of rising rents and community displacements.

Many residents in our local community also see the Olympics as an opportunity to finally get proper investment in jobs, infrastructure and public facilities that the community have been demanding for years, including new public parkland, social and public housing, and active and public transport.

Our community will be one of the most heavily impacted by the games, and the planning and construction in the lead to the games – So, to ensure we get some positive outcomes, it’s crucial we get in early and make clear community demands. This can only happen through proper consultation and solidarity among local residents keen to protect and fight for our neighbourhood.

I will be continuing to work with the local community to develop a local Community Vision for the games and would love to get your feedback – What’s important to you? What would you like to see included?

Read the draft community vision statment here and then have your say here. 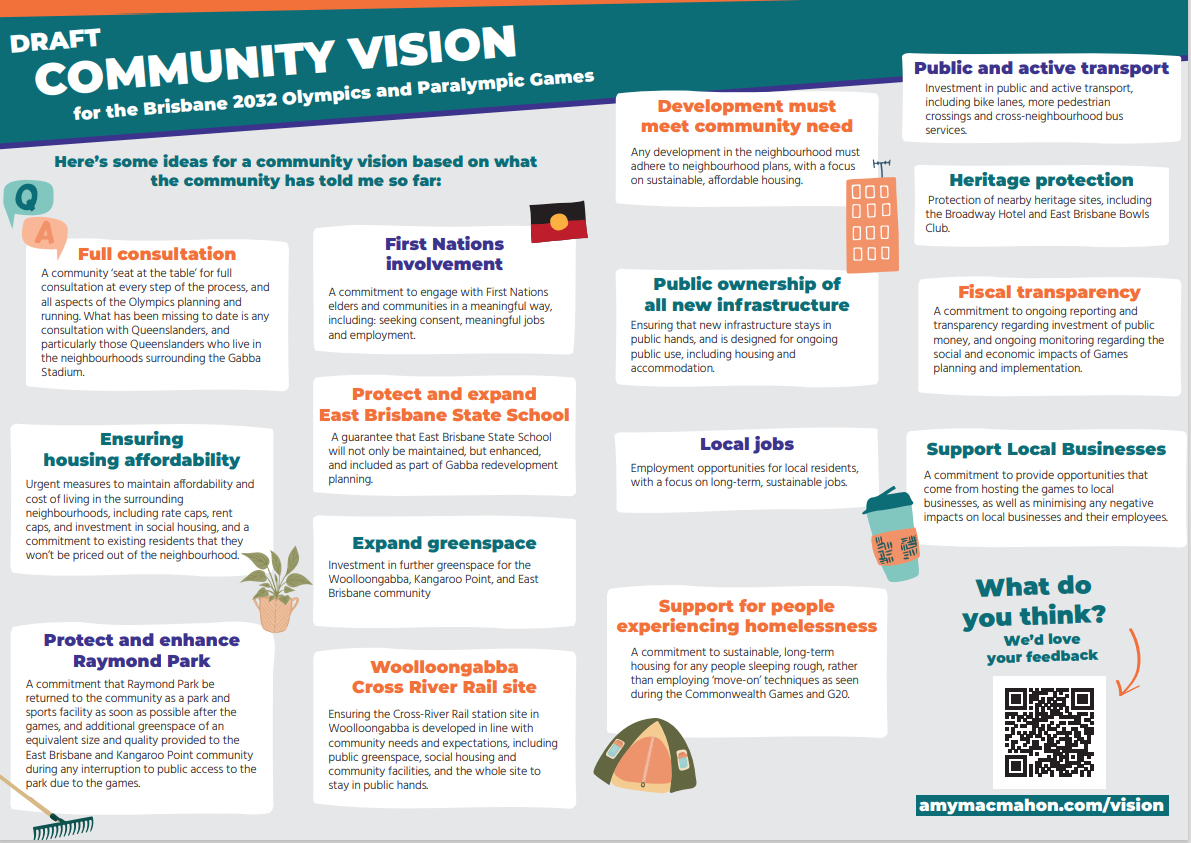 What do we know so far about South Brisbane:

THE GABBA: The State and Federal Government have announced a whopping $1 billion to demolish and rebuild the Gabba as the main Olympic Stadium, increasing its capacity from 42 000 to 50 000.

EAST BRISBANE STATE SCHOOL (EBSS): EBSS is right next to the Gabba Stadium and will obviously be heavily impacted. The government is yet to release the final plans for the school, but visualisations show EBSS completely transformed. If you’re interested, you can check out the digital depiction here. The school community is keen to protect the school and ensure investment to its long-term future.

RAYMOND PARK: Brisbane City Council and the State Government have confirmed plans for Raymond Park  in Kangaroo Point to be the location of the warm-up facilities for athletics events held at the Gabba. Notably, Olympics warm-up facilities for athletics usually consist of an eight-lane, 400m circuit warm up track and field – which would take up an area of around 17 000m2. Locals have raised concerns that to fit this infrastructure into Raymond park, it would require acquisition of homes and the removal of many established trees. Further, many locals are doubtful the park will be returned to the community – having just paid to build expensive athletics facilities, there would be resistance to tear it down after the games.

WOOLLOONGABBA CROSS RIVER RAIL SITE: The government is yet to make clear what the Olympics will mean for the Woolloongabba Cross River Rail site. Announcements and visualisations have indicated it will become a ‘pedestrian plaza’ over Main Street, to connect the station with the stadium. In the lead up to the 2020 election, the Labor government committed to at least 50% green space at this site - I will be holding them to this promise and not accepting any downgrade to open space.

RIVERFRONT PARKLAND ALONG MONTAGUE ROAD: The Lord Mayor announced in July that 7 hectares of land along Montague Road will be bought by the government to host the media centre for the games. After the games, they have committed to turning this into what they’re calling ‘multi-use parland and suburban renewal precinct.’ From the maps, it looks like it's going to be where the glass factory is now, just to the West of the Go Between Bridge.Turning these old industrial sites along Montague Road into parkland is something locals and community groups have long been calling for and is very welcomed – but we’ll need to keep a close eye to make sure proper consultation takes place and this site remains in public hands following the games.

What I've been working on in Parliament:

EBSS & QEII: During budget estimates, I also asked the director general whether the government could guarantee the protection of EBSS and what investigations had been made into establishing QEII as the main stadium as an alternative to the Gabba. I was told the details around EBSS were a matter for the 2032 Taskforce and that time frames could not be advised. No information was provided about QEII, despite the fact that its purpose built for athletics and already has nearby warm-up facilities. This non answer can be found on page 11 of the Hansard here.

ECONOMIC BENEFITS: In 2019, Labor commissioned a massive accounting firm, KPMG, to analyse the economic impact of the games. Initially, they estimated that the games would provide Queensland with $7.4 billion worth of ‘quantifiable economic benefits.’ Then in May they updated their analysis, increasing this figure to $8.1 billion – but $3.5 billion of that is ambiguous ‘social benefits’ like ‘prestige’ and ‘civic pride.’ So back in May, I asked the Premier for a more detailed breakdown of the figures, and was simply told the benefits would come from tourism and trade, as well as other vague areas like health, the utilisation of volunteers, and resident benefits. If you’re interested, you can read the exchange here.

Likewise, I asked the Premier about the 130 000 jobs expected to be created by the games – asking (a) what the average length of these jobs would be, (b) for a breakdown of occupations, and (c) for a breakdown of private vs public sector jobs. I was told the figure includes both full time and short-term jobs, including 5000 jobs per year leading up to the games, 115 000 during the games, and 10 000 after the games. Further analysis by KPMG showed this would result in 91 600 full time employment years in Queensland and 122 900 full time job years nationally. If you’re interested, you can read the exchange here.

I don’t think these numbers are credible, and we need to remember the Sydney Olympics cost almost twice as much as we expected. So, the finances of the Brisbane Games will need to be held to public scrutiny, or we could end up forking out billions in cost overruns, with no idea what we’ll get in return.