The Impact of the 2032 Olympics on our Neighbourhood

Brisbane is likely to be the host city for the 2032 Summer Olympics and Paralympics. While this is some time away, I’m really concerned about the impact of the Olympics on our neighbourhood, including accelerated gentrification, rising cost of living, and the impact on local schools.

The proposed plans for the Olympic Stadium involve a complete rebuild of the Gabba stadium, at a cost of $1 Billion. The nearby Raymond Park, one of the few substantial sections of greenspace in the neighbourhood, will be acquired for a warm-up track. East Brisbane State School, right next to the stadium, will be heavily impacted - the school community are keen to ensure that the school is protected and it’s long-term future is assured.

Lack of Consultation and Transparency

Local residents should have a say on whether their neighbourhood hosts a mega-event like the Olympics. In cities like Munch and Hamburg, residents were able to say ‘no’ to plans to host the Olympics in public plebiscites. But in Brisbane, there has been no community consultation. The plans for the games are commercial in confidence, meaning they won't be shared with the public. A few months ago, the council had its first closed-door meeting in nearly 15 years to discuss and vote on the Olympic bid. The last time they did that was for Clem7, a project that went bankrupt.

As a renter myself, I’m worried that new property developments leading up to the Olympics will drive up rates and rents, push out long-term residents, and make it unaffordable for renters to live in Woolloongabba and East Brisbane. We’re already in a housing crisis, with so many people struggling to pay their rents and mortgages - the Olympics will only exacerbate this.

Development and Planning driven by the Olympics, not Community Need

While the 2032 Olympics is still a decade away, most of the plans for development will be made in the next two years. Once the contract to host the Olympics is signed, development decisions for the south side will be heavily influenced by the International Olympic Committee, without input from you and your neighbours.  I don't think we should trust a committee of business people to put the needs of the Woolloongabba and East Brisbane community first.

Past Experiences with Major Events

There are many examples of communities having really negative experiences with major events. In the lead up to Expo 88, residents, in particular, First Nations people, were evicted from their homes so they could be demolished to make way for highrises. The developments resulted in real estate prices increasing by 58% across the suburb.  The community had to fight hard to stop the whole area from being turned into private luxury apartments. Elsewhere, hosting the Olympics has resulted in an increased cost of living, and the projected economic benefits have not been achieved – some researchers label the Olympics as a “poor investment decision” [1].

Impacts on People who are Homeless

There is a long history of city “cleaning” in the lead up to international events. Police are instructed to remove people who are homeless from the streets, as happened in Brisbane during the G20 meeting, and on the Gold Coast during the Commonwealth Games.  Rather than properly funding and supporting housing services, an increased police presence has a huge impact on vulnerable groups and First Nations community members (while also using First Nations culture to market the Olympic Games). 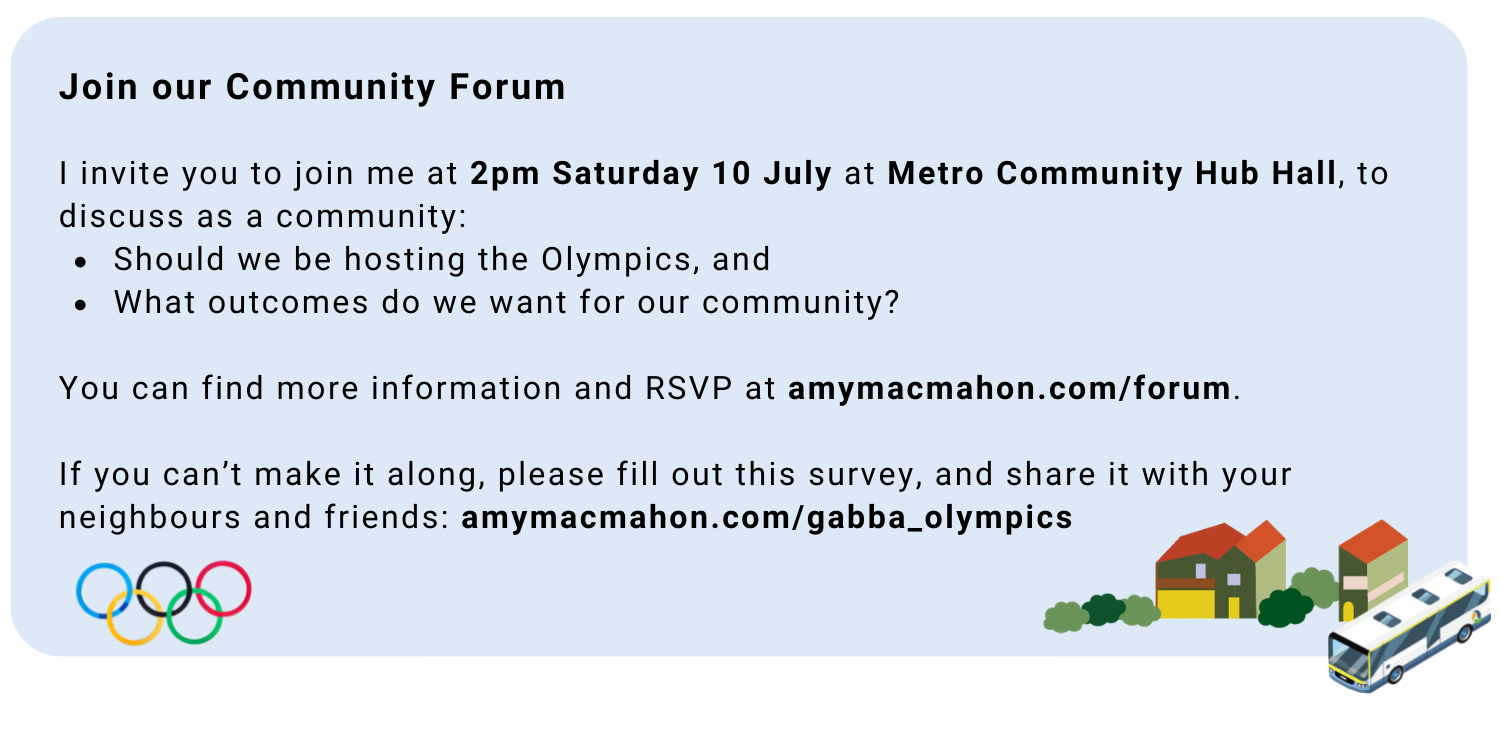