As part of the Cross River Rail project, the Queensland government is planning a massive redevelopment of the Roma Street transport hub and the area around Roma Street Parklands. The Development Scheme published last month shows the government’s vision for the site, including a new underground station, an entertainment complex, and an unspecified number of new highrises. There was a huge community mobilisation during the consultation period, which has resulted in some changes to the plan, but overall I’m concerned about the privatisation of a significant amount of green space, developers getting away without paying their fair share of infrastructure charges, and the impacts on Roma St Parklands. 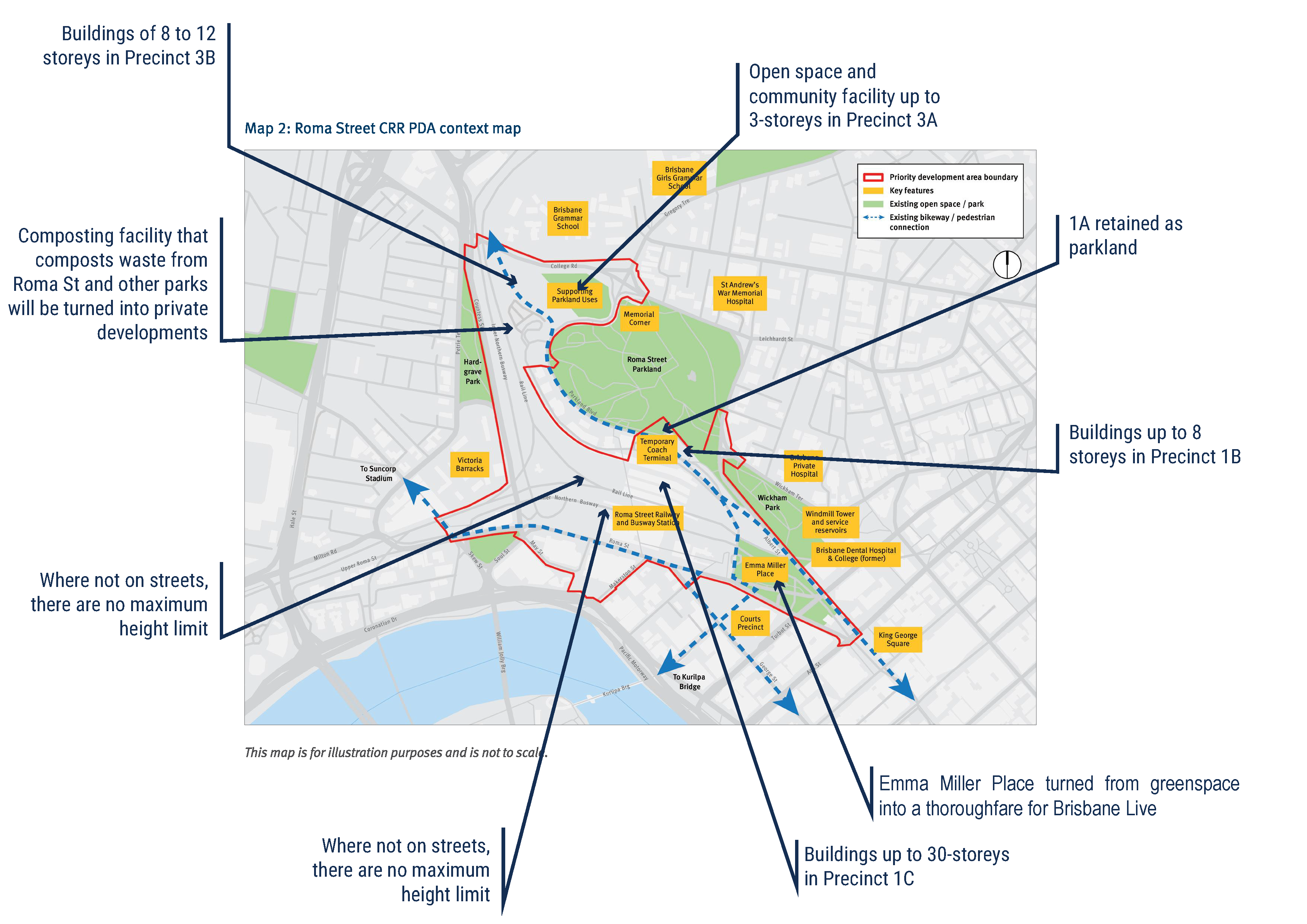 During the consultation period, a community petition to protect the parkland gathered 33,000 signatures, and the development scheme received a total of 1,155 submissions, almost all of them asking to protect green space and public ownership (it doesn’t seem like anyone got in touch to ask the state to build even more luxury apartments and privatise even more parkland...) You can read the response to submissions here.

But by designating Roma Street as a Priority Development Area (PDA), the Queensland government can fast-track approvals and exempt developers from the ordinary process of public consultation.

We need a plan for Brisbane’s future that’s guided by public consultation, that keeps land in public hands, and that preserves and expands green space and other public facilities. Sadly, the Roma Street project largely fails this test, and it sets a dangerous precedent for the future of Brisbane’s development.

What are the problems with the Roma St redevelopment?

The PDA system seems designed to prevent people having a meaningful say over development. There was no consultation taken before the draft development scheme and offset plan was announced, and two out of three informational sessions with Cross River Rail planners were held during work hours. The state government is planning to completely reconstruct the heart of Brisbane, yet almost every decision has been made behind closed doors - there’s only been a handful of meetings with the public. Despite over 1000 submissions, only minor changes have been made to accommodate community concerns.

Roma Street Parklands is one of the world’s finest subtropical gardens. Currently, the Queensland government plans to open up around a third of the existing park space to development, enabling private developers to build luxury apartments on what was formerly public land. They are getting around this by saying that of the 16 hectares of park, only 11 hectares are actually part of the public Roma Street Parkland. The current plan allows for towers of up to 30 stories or higher to encircle the gardens, cutting them off from sunlight, with a minimum requirement for just 4 hours of sunlight in winter.

This is a good opportunity to consider what Brisbane actually needs in terms of green space.  We should be expanding our parklands, not contracting them. The government’s plan suggests that there will be no net loss in terms of “publicly accessible space” - but this is a conveniently chosen set of words that allows for a lot of wiggle room around what that space actually looks like. We could see a massive drop in the quantity and quality of public space, with green fields replaced by concrete and the remaining gardens cast into shadow. The plans also don't take into account the additional greenpace that should be delivered for the expected 4000+ people who will live in the new development (you can see these projections in the infrastructure report here).

Brisbane’s historic Emma Miller Place - a grassy meeting place with established trees and a small amphitheatre - will no longer be green parkland under the government’s plan. It will likely be turned into a paved forecourt for the ‘Brisbane Live’ entertainment centre.

Loss of the compost and recycling centre

In response to community pressure, the development scheme stipulates that “a minimum of 10% of total residential GFA as social housing or affordable housing”. Inclusionary zoning is something the Greens have been pushing for for years.

The implementation section states “The CRRDA works together with relevant agencies to develop an affordable and social housing guideline. The guideline will cover private rental housing and home purchase options and will have a strong focus on mechanisms that deliver long-term housing affordability”.

This is pretty ambiguous, and could result in schemes like built-to-rent, that just give developers huge subsidies to offer apartments at cheaper rents for a period of time. This ambiguity means that we’re unlikely to see the kind of direct investment in publicly-owned housing that we really need.

There is a great opportunity here to have high-quality residential developments near the new train station. But I’m skeptical as to whether 30-storeys - or indeed unlimited storeys - delivers livability for residents. Buildings of this size separate people from the streetscape, looses the ‘human scale’, reduces opportunities for people to meet each other and build community. Large towers also fuel gentrification and unaffordability - the larger the building, the more expensive it is to build, and the more likely they are to attract wealthy developers interested in luxury, rather than community or affordability.

While a PDA technically allows the government to impose higher infrastructure charges on developers, exceeding the state government’s current gap (which is far too low), there’s no provision in the plan to actually make developers pay their fair share - effectively forgoing hundreds of thousands of dollars in revenue, which could be used to pay for the essential services we need.

What can we do about it?

Despite the state government’s attempts to exempt the Roma Street development from the kind of in-depth public oversight we really need, the local community has been very active in banding together to protect the park from overdevelopment. It’s been inspiring to see how willing people are to step up to save our parkland, and it’s clear there’s a strong desire in the community to ensure that green space is prioritised over private development.

In response to the huge community response to the draft plan, the government seem to have allowed some small concessions - the plan has been changed to include an additional hectare of public space, assurances for disability parking, and 10% ‘affordable’ housing. This is a step forward - but it’s a pretty minimal response, considering the volume of public interest in the overall development. We know that public pressure works, but we also know we’re going to face a lot of resistance. The government doesn’t particularly want to hear from us, so if we want to be heard we’ll have to get louder.

We need to start thinking now about how we’re going to handle these problems in the future, and working to develop a more democratic model of development. In particular, the PDA model where areas of Brisbane are declared to be exempt from oversight and turned over the private developers need to be overhauled. This can happen but it’s going to take a critical mass of people to get there.

What are the implications for Brisbane’s future?

The next phase of this strategy will be to roll out PDAs for the Gabba, and for Boggo Road, in South Brisbane. With the coming 2032 Olympic and Paralympic Games, I’m worried this kind of top-down planning will become more and more common, with communities shut out of decision-making about how our city is developed. Roma Street shows us what could happen in the Gabba - the decimation of green space, the mass sell-off of public land and the construction of huge sterile towers that are totally inaccessible to the majority of people. But this only works if we’re not paying attention. So we need to insist on having a say. I’m calling for the state government to ensure that public land stays in public hands, and to implement a community vision for both sites, that includes in-depth community consultation. To win this, we’re going to need to come together as a community and fight for these sites.