Make the developers pay to upgrade the Stones Corner roundabout 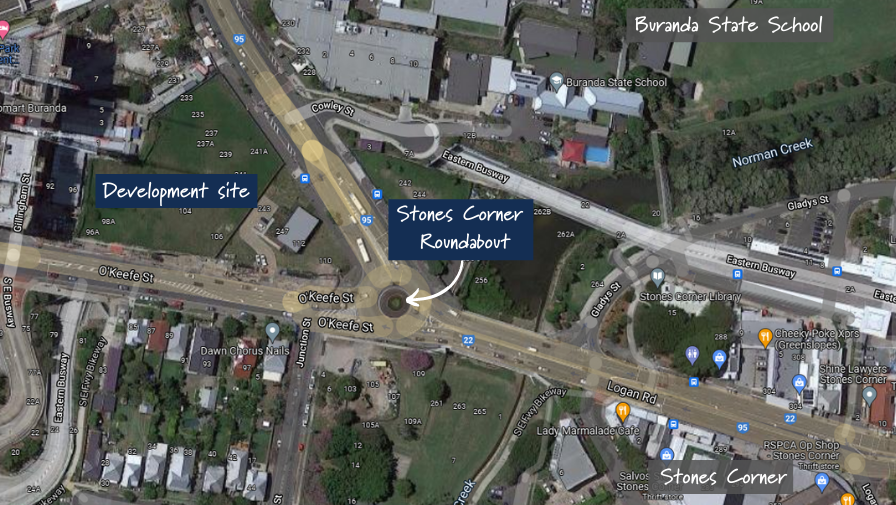 Wee Hur Holdings is proposing four towers and more than 600 private car parks as part of a massive development right beside the Stones Corner Roundabout. The intersection is already a nightmare to navigate – particularly as a pedestrian or cyclist. But despite the profits Wee Hur will earn from this development, they're refusing to pay for the roundabout upgrade.

The developers have included in their plans a proposal to turn the round-about into traffic lights. But despite the obscene profit they’ll make from this development, they don't think they should have to fund this crucial intersection upgrade. We’re demanding that Brisbane City Council make Wee Hur pay to upgrade the O’Keefe St/Logan Road roundabout and Junction Street turn.

Help us tell Council: make the developers pay to upgrade the Stones Corner roundabout, including:

Council can and should make this a condition of any development approvals on this site. Sign the petition to pressure the Lord Mayor and our local Councillor Fiona Cunningham to make this happen.

Our community deserves a development that delivers what we need. I’ve already emailed Cr Fiona Cunningham, Councillor for Coorparoo Ward and the Lord Mayor to demand they not approve Wee Hur’s development and instead push the developer to be in line with Transport Oriented Development principles. Which should include:

It's important that they're hearing from you directly about the impacts of the development on the local community. After you sign the petition, you’ll be redirected to an email template that you can use to email BCC and Cr Fiona Cunningham.

Read more about the proposed development details next to the Buranda Train Station here.