My office collected 433 responses to a survey we ran on ‘Sex, Relationship and Consent Education in Queensland Schools’, primarily focussed on the views of young Queenslanders, aged 25 years and under.

We ran the survey between May and July 2021, posting it on social media and including it in my print and email newsletters. 433 people responded, 349 of whom were born in 1995 or later. Here is a snapshot of the survey results.

Question 1: What schools did the respondents go to?

Question 2: How did respondents feel about the quality of the sex, relationship and consent education that they received at school?

As a regional high school student aged 17 said,  ‘All I’m saying is if Google didn’t exist I wouldn’t know anything.’ A 22 your-old who went to a state high school said ‘Not providing information or only teaching abstinence only leads to students not understanding safe sex or being victim to sexual assault because they were never taught about consent’. One 17-year-old at an independent school said ‘[The education] did not discuss what a healthy relationship looks like, should feel like etc.’ 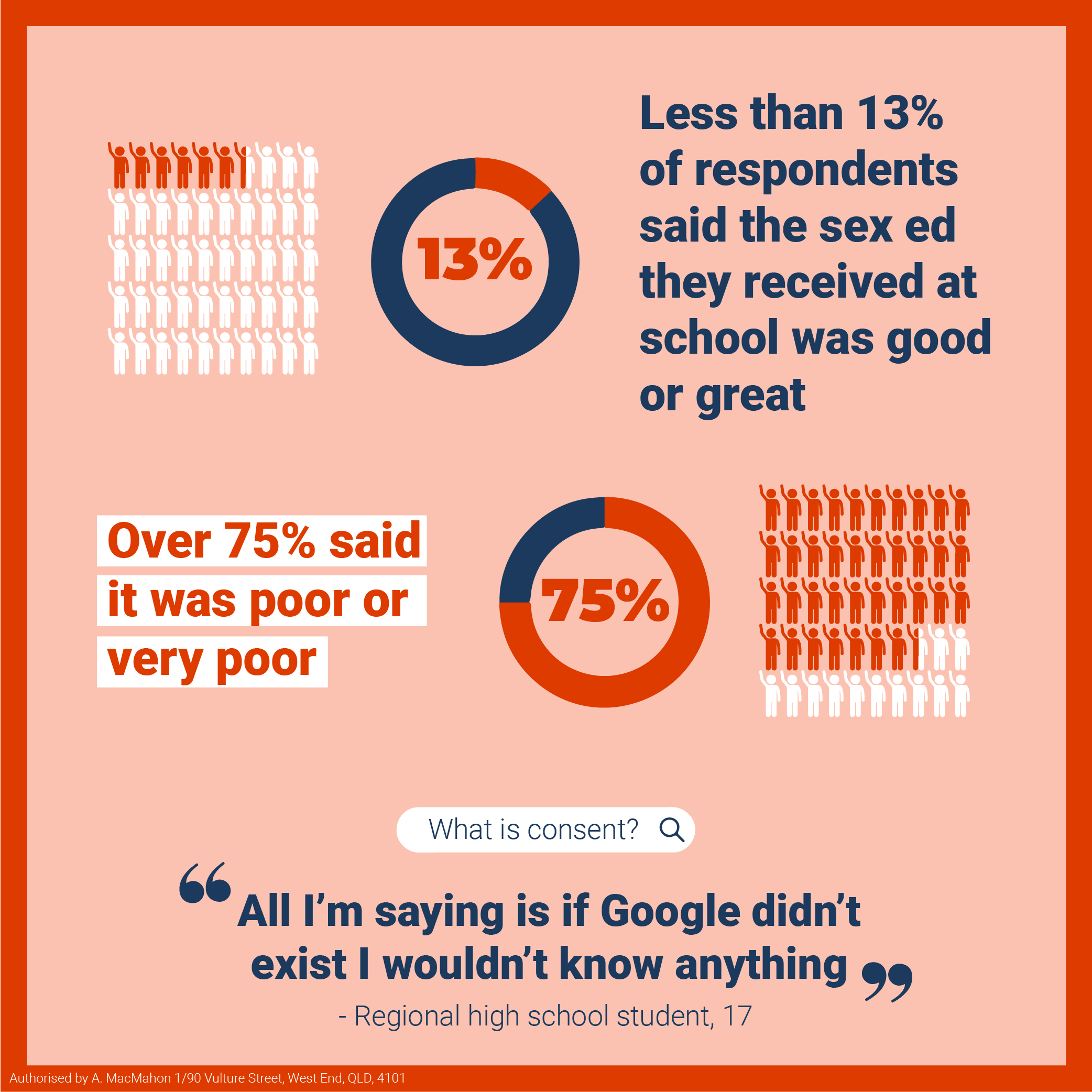 Question 3: Did respondents feel that the sex and relationship education they received at school covered consent?

Given what we know about the importance of consent education and respectful relationships to people’s wellbeing, and helping to change the prevalence of domestic violence and sexual assault in society, this really struck me. Extensive consultation with the Queensland women’s sector tells me that they are asking for much better investment in primary prevention of domestic violence and sexual assault, as well as stable funding for frontline services. Consent education in schools is a key plank in this primary prevention, and we are missing this opportunity. 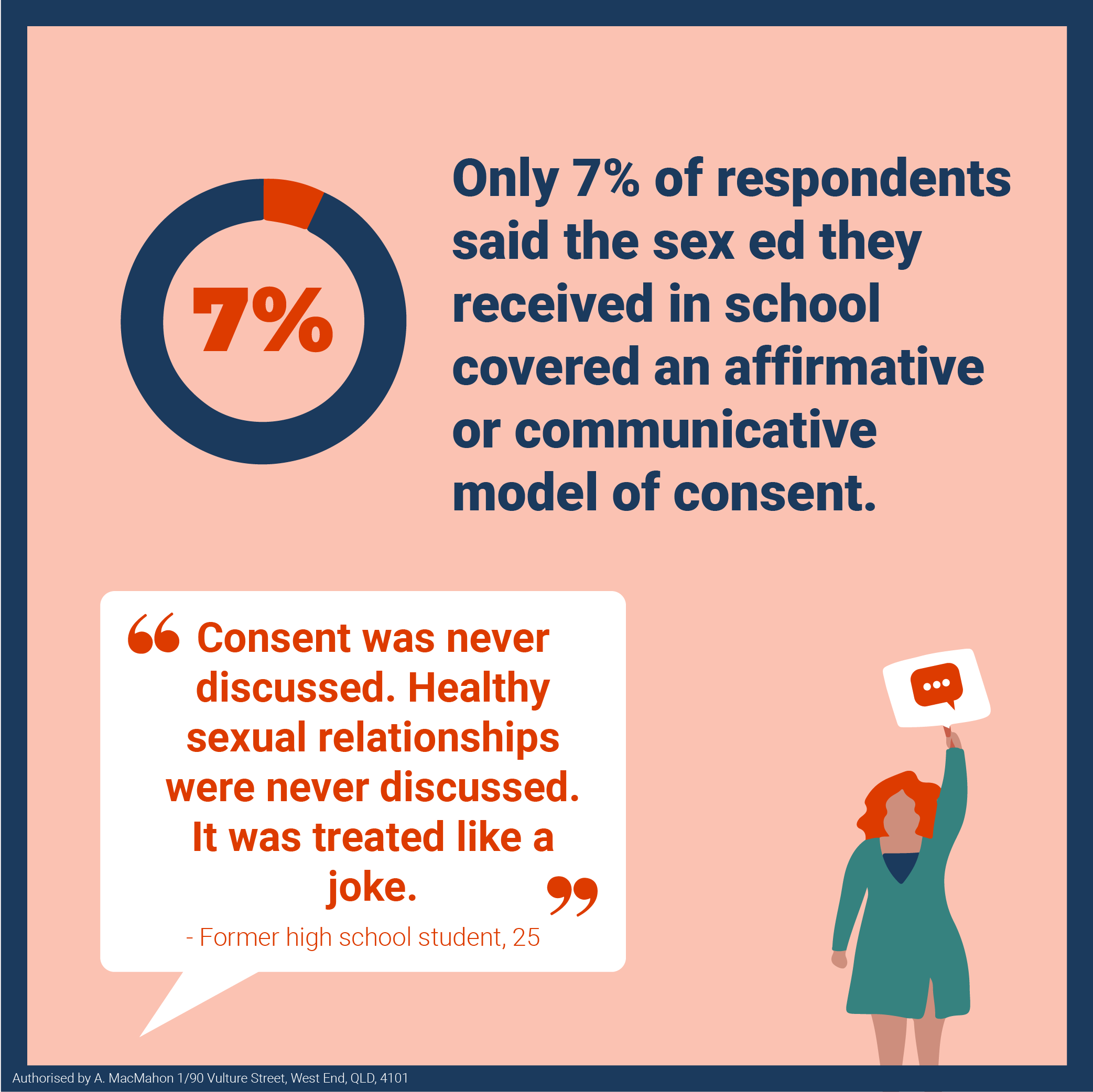 Question 4: How did the respondents feel about how the sex, relationships and consent education they received at school affected their lives?

8.02% of respondents said the education they received was positive, providing them with the requisite knowledge to navigate safe relationships. 41.83% said it was neutral. 50.14% said the sex, relationships and consent education they recieved had a negative effect on their lives, not giving them the knowledge they needed to navigate safe relationships. A 16 year-old student at a religious high school said ‘As a gay teenager, I have received no information whatsoever from the school, except, in some cases, religious teachers suggesting it was not okay.’ A 16 year-old at a state high school said ‘As I have seen myself many don’t know [about consent] which had detrimental impact on others’. One 22-year-old said ‘[I’d like to see education on] Sexual assault, consent, toxic relationships, lgbtq+ relationships, open discussions about the lgbtq+ community. If we had any of this information while I was at school I wouldn’t have been in the situations I’d been in’. 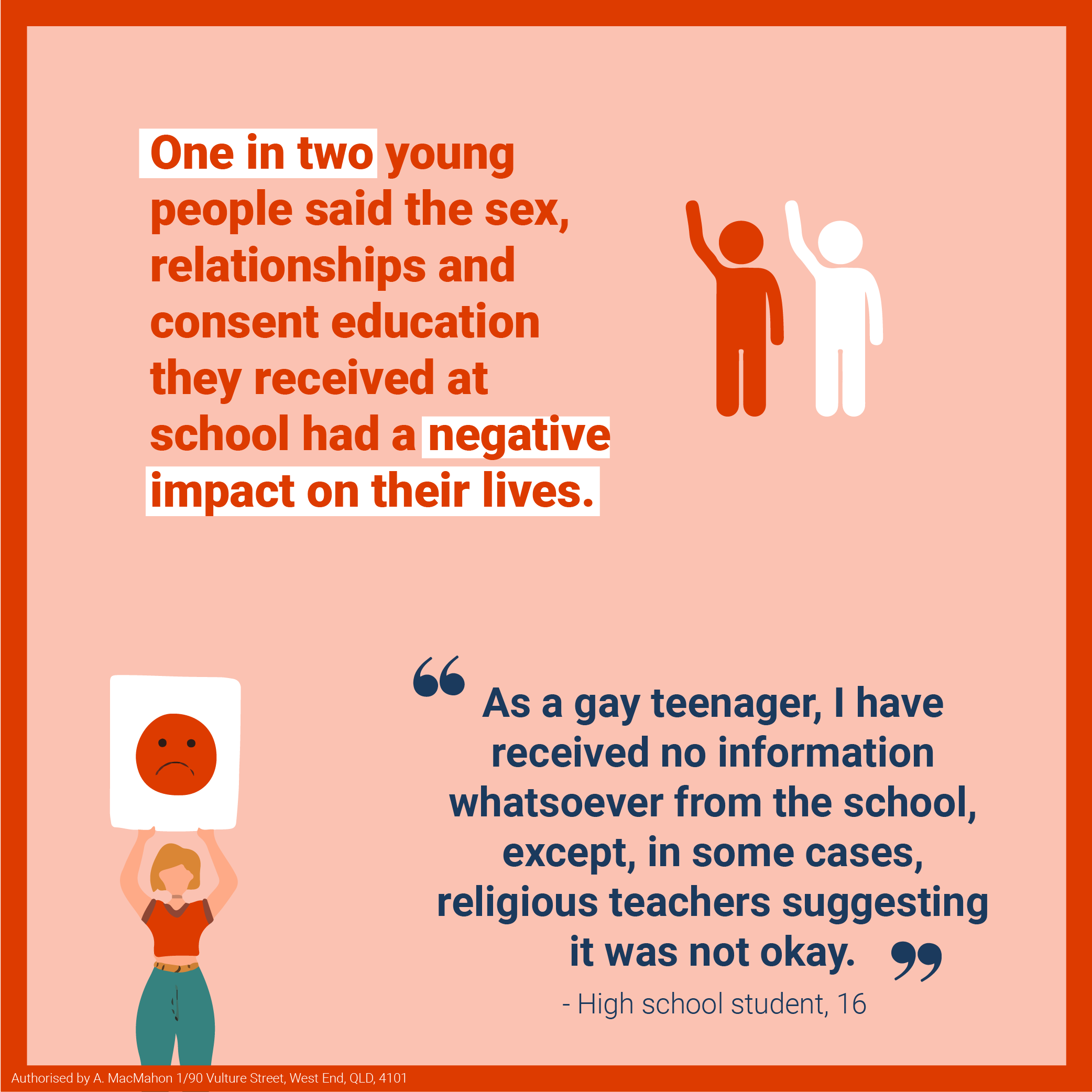 Question 5: Finally, I asked respondents what information they would like included in sex, relationship and consent education in Queensland schools.

We received detailed, thoughtful feedback from respondants about what they think would be beneficial to in sex and relationship education in Queensland schools. I learned that young Queenslanders want the following included in sex, relationship and consent education:

A former high school student, aged 24, said ‘I would like a much more in-depth framework that allows for the whole spectrum of relationships, what both green and red flags look like, what consent is and more discussion about female pleasure.’ 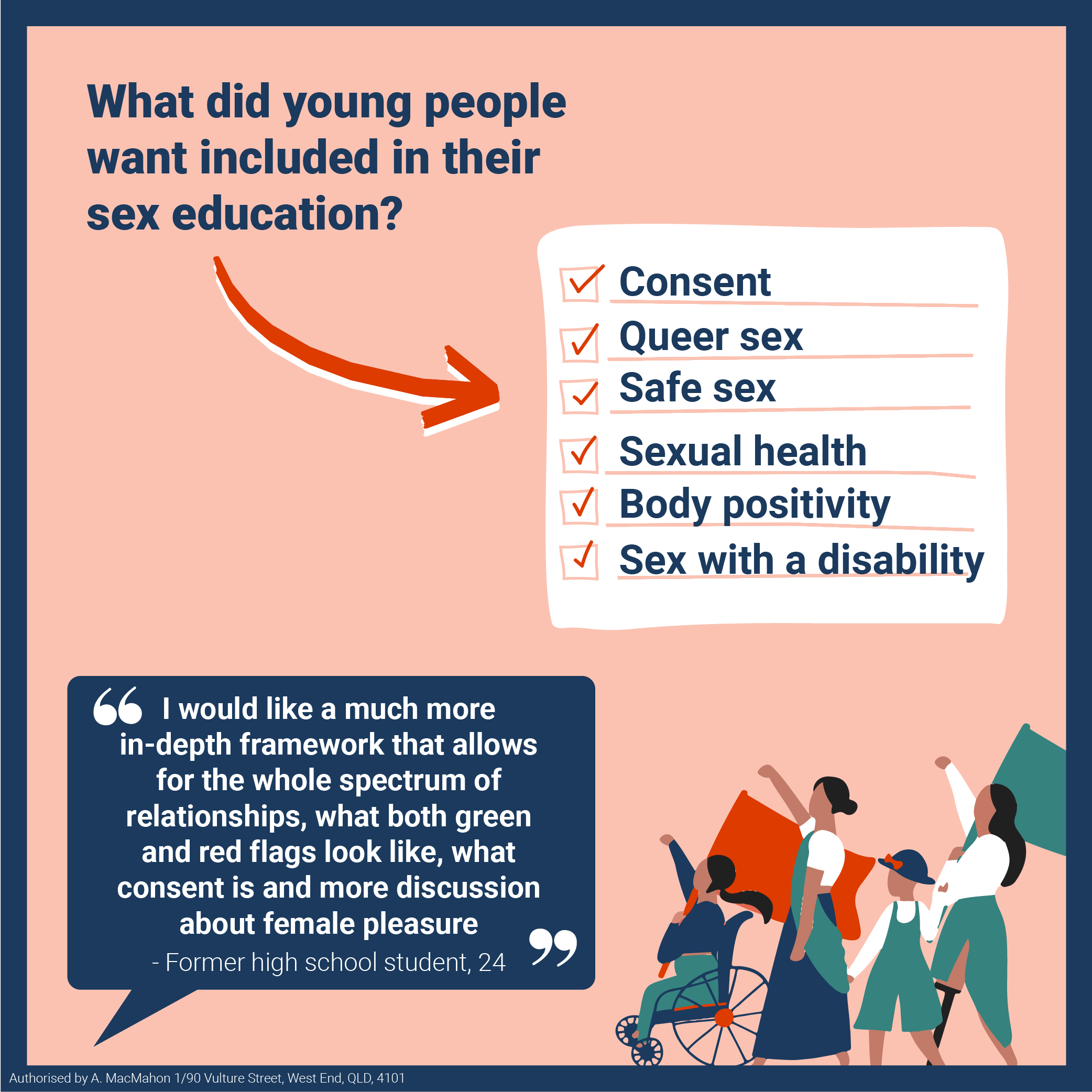 I heard from 84 respondents aged over 25, ranging in age from 26 to 65. Exactly two thirds of this group said that their sex education impacted their lives negatively. 27.38% said it was neutral. 5.95% said it was positive for them. Nearly every single person said consent education needs to be improved, suggesting the following:

I have been amazed by the response to this survey, and the insightfulness of the responses. It is so clear to me, from analysing this survey, that sex education in schools is not equipping students with the knowledge they need to navigate sexual and personal relationships in their lives.

In particular, what young people have told me is that consent education in schools is simply inadequate. It seems to be barely covered, and does not talk about affirmative consent when it is. If we are to tackle sexual inequality, domestic violence and sexual assault in society, meaningful sex and consent education in schools is a critical next step.